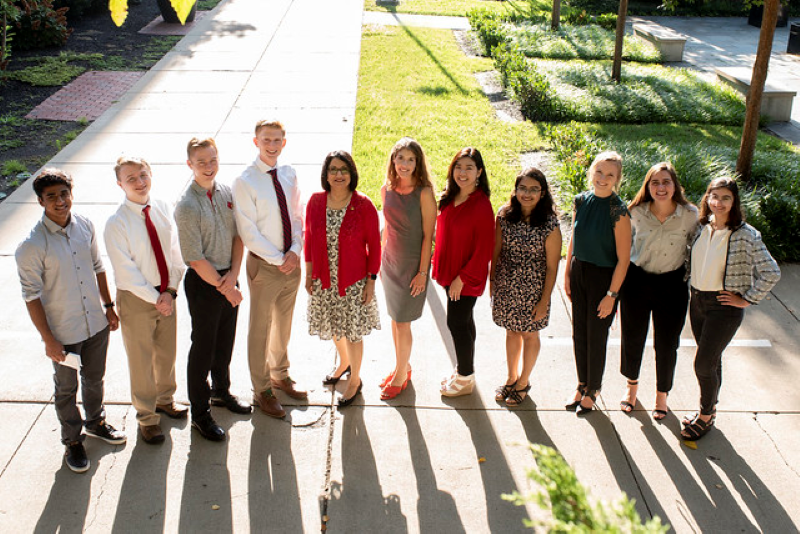 Each year, ten Grawemeyer Scholars receive a full, four-year-renewable scholarship, based on their promise for undergraduate research, leadership, and service to the University, as exemplified by their test scores, high school grades, letters of recommendation, and records of extracurricular achievement.

Grawemeyer Scholars receive a dedicated program of civic, cultural, and leadership education during their freshman year, during which Program administration and UofL faculty work to match them with an undergraduate research experience in any field of study offered at the University.

The scholarship may also be used to fund a semester abroad, which the Program strongly encourages and works with the Study Abroad Office to facilitate.

Full in-state tuition, plus a stipend for room, board, and books. Non-resident recipients will receive an enhancement to their National Scholars award.  31 ACT or 1360 SAT (CR + M) and 3.5 GPA. More information and application materials can be found on the UofL Admissions Mentored Scholarships web pages. 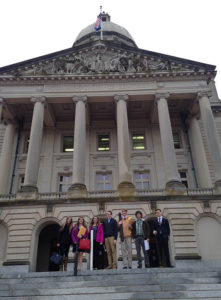 Recipients of Mentored Scholarships — Brown Fellows, Grawemeyer Scholars, and Jones Scholars — presented their research at the Posters at the Capitol event in February of 2016. 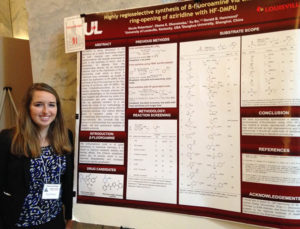 This year’s incoming class of ten Grawemeyer Scholars includes nine Kentuckians and one scholar from Ohio. They include Governor’s Scholars, Governor’s School for the Arts alumni, National Merit and AP-recognized scholars, musicians and athletes.

Elizabeth Crawford Assumption High School, Louisville. Elizabeth graduated with honors as a McAuley Scholar, an AP Scholar with distinction, and a recipient of the AP Capstone diploma for her research on intergenerational theories in The Catcher in the Rye. She held executive positions in the YMCA’s Youth in Government program and her school’s theater company, and was a service advocate within her school. Elizabeth is a 2018 graduate of Murray State University’s Commonwealth Honors Academy. She is majoring in chemical engineering.

Gopika Gopan, Gatton Academy, Bowling Green. Gopika graduated from both Gatton and Henderson County High School. At Gatton, she researched self-regulation in preschoolers, and received a Research Internship Grant. She was president of the Study Buddies Club, a tutoring program for kids with Down Syndrome. She was a Children’s Library Volunteer at the Henderson County Library and a Junior Volunteer at the Methodist Hospital in Henderson County. AT HCHS, she held leadership positions in Academic Team and Environmental Club. She is a Biology major.

Srikur Kanuparthy, duPont Manual High School, Louisville. Srikur is an AP Scholar with Distinction and a National Merit Scholar.  Srikur swam on his high school team and loves to play ultimate frisbee. He was Treasurer of his school’s National Honor Society and a Student Senator, among other extracurricular activities, and volunteered for more than 300 hours over the course of his high school career. He is majoring in Computer Engineering & Computer Science.

Bryan McLellan, Lafayette High School, Lexington. Bryan graduated from Lafayette’s Pre-Engineering Program at the top of his class. He is a Governor’s Scholar and an AP Scholar with Distinction. He served as the school’s Beta Club President, was National Honor Society Vice-President, and was active in the school’s student council. Bryan swam for his high school’s varsity swim team and swam year-round for Kentucky Aquatics. While at Lafayette, Bryan conducted cancer research at the University of Kentucky’s Markey Cancer Center. Bryan is a Bioengineering major.

Lanie Miller, McCracken County High School, Paducah. Valedictorian of McCracken County High School, Lanie served as President of HOSA-Future Health Professionals and as Secretary of the National Honors Society.  She interned with the mayor of Paducah for two years, during which she co-founded and led a local program to promote youth civic engagement.  Lanie is an AP Scholar, Jeff Green Scholar, Project Lead The Way Biomedical Science Alumna, and a Kentucky Registered Nurse Aide.  She is majoring in nursing.

Betty Ngo, duPont Manual High School, Louisville. Betty, a Governor’s Scholar, has worked with UofL’s Eating Anxiety Treatment Lab for three years and has presented her research at the American Junior Academy of Sciences and the American Behavioral and Cognitive Therapies conferences. She co-founded STEM+Youth Academy, an initiative aimed to break socioeconomic, racial, and gender barriers through STEM education. Her efforts were recognized at the International Community Problem Solving Competition. She is majoring in Psychology.

Martha Popescu, North Hopkins High School, Madisonville. Martha was Valedictorian, a National Merit Finalist, a National AP Scholar, and a Kentucky Governor’s Scholar. She was President of Spanish Club and an active member of her high school’s Academic Team, Kentucky UN Assembly, and Key Club. Martha also worked for The Learning Center Madisonville, where she served as Camp Director for the summer of 2019. She recently completed her 14th year of tap dance instruction. Martha is majoring in Anthropology and Spanish.

Caleb Russell, Beavercreek HS, Beavercreek, Ohio. Caleb is an AP Scholar with Honor and a National Merit Commended Scholar. He earned four varsity letters in track and soccer and was a member of the 2017 Ohio state soccer championship team. He was Vice-President of his senior class and participated in National Honor Society, Student Council, and Model UN. He also organized volunteer efforts for The Outreach Program for Soccer, which provides soccer opportunities for those with disabilities. Caleb is a Bioengineering major.

Cian Toole, duPont Manual High School, Louisville.  Cian graduated as valedictorian and is an AP Scholar with Honor.  He is an Eagle Scout, an eight-year participant in FIRST Robotics, and a six-year member of the Louisville Youth Orchestra. His interests include theater arts, mentoring middle-school robotics teams, and software engineering.  He is majoring in computer engineering and computer science and would like to continue his studies in medical school, pursing the application of computer vision to ophthalmology and biomedical engineering.