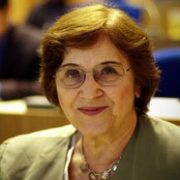 Anne Treisman, the James S. McDonnell Distinguished University Professor of psychology at Princeton University, was selected for the ninth Grawemeyer psychology prize from among 28 nominations.

Treisman, a cognitive psychologist, proposed in 1980 that attention acts as an inner spotlight in the brain, rapidly scanning features such as color, shape, distance and motion and linking them into an integrated whole. Her theory of feature integration prompted a wide range of study that continues today, award judges said.

Scientists are still using the concept to help airport baggage inspectors detect weapons, to design classrooms that stimulate children without overloading them and to make it easier for people to tell pills apart, said Woody Petry, a UofL professor of psychological and brain sciences who directs the award.

“Her theory explains why we see a red sports car driving by instead of an assortment of different features such as the color red, a shape in motion and so on,” Petry said.

Work by Treisman and her colleagues also has led to better understanding of some psychological and medical problems such as Balints’ syndrome, in which people cannot recognize more than one object at a time.

The Grawemeyer Awards at UofL awards $1 million each year $200,000 each for works in music composition, ideas improving world order, psychology, education and religion. Winners of the other Grawemeyer Awards also are being announced this week.

Anne Treisman is the James S. McDonnell Distinguished University Professor of Psychology at Princeton University, where she has taught since 1993.

A British and U.S. citizen, she received her doctoral degree from Oxford University and her bachelor’s degree from Cambridge University. She has honorary doctorates from University of British Columbia and University College in London.

Before joining the Princeton faculty, she was a psychology professor at University of California-Berkeley and University of British Columbia. She had fellowships at the Canadian Institute for Advanced Research, Center for Advanced Study in Behavioral Sciences at Stanford and St. Anne’s College at Oxford and also was university lecturer at Oxford. She had been a visiting scholar for the Russell Sage Foundation in New York and a visiting research scientist at Bell Telephone Laboratories in New Jersey.

She was chosen as a fellow of the American Psychological Society and the Royal Society of London as well as elected member of the National Academy of Sciences, American Academy of Arts and Sciences and American Philosophical Society. She also is a member of the British Experimental Psychology Society, Psychonomic Society, Cognitive Neuroscience Society, Society of Experimental Psychologists and Association for Research in Vision and Ophthalmology.

She has served on the editorial boards of academic journals Vision Cognition, Perspectives on Psychological Sciences, Canadian Journal of Psychology and the Journal of Experimental Psychology: Human Perception and Performance and published in many academic journals. The National Institutes of Health, the National Science Foundation and the U.S. Air Force Office of Scientific Research all have funded her work.

Her current research interests include visual perception of objects and the role of attention, integration of information in perception of moving and changing objects, perceptual learning, visual memory for objects and events, and the coding of shape and motion.

U.S. must own up to misdeeds, says Grawemeyer religion winner
Scroll to top