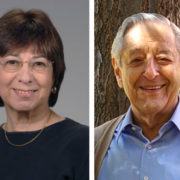 Leslie Ungerleider and Mortimer Mishkin, two National Institute of Mental Health researchers, have won the 2012 University of Louisville Grawemeyer Award for Psychology for their “what and where” idea of how the brain works.

The two scientists were the first to show that the brain uses separate visual processing systems to recognize objects and fix their location. Their finding that the cerebral cortex is organized into two pathways—one for each function—has led to a series of other important discoveries about the brain, said award director Woody Petry.

“Few ideas have been so influential on the field of psychology and neuroscience,” Petry said.

Researchers building on the “what and where” pathways idea have established how the brain recognizes faces, words and body parts and how it controls our attention, eye movements and spatial memory. Studies also are under way to learn whether the brain divides up its perception of other sensations such as hearing and touch.

Ungerleider and Mishkin were selected for the prize from more than 20 nominations.

UofL presents four Grawemeyer Awards each year for outstanding works in music composition, world order, psychology and education. The university and Louisville Presbyterian Theological Seminary jointly give a firth award in religion. This year’s awards are $100,000 each.

Leslie Ungerleider is chief of the Laboratory of Brain and Cognition at the National Institute of Mental Health.

An NIH distinguished investigator, she was elected to the National Academy of Sciences, received the Women in Neuroscience’s Lifetime Achievement Award and has earned honors from the Cognitive Neuroscience Society, Association for Psychological Science, Institute of Medicine and American Academy of Arts and Sciences.

Mortimer Mishkin is chief of the cognitive neuroscience section of the Laboratory of Neuropsychology at NIMH. He has worked at the institute since 1955 in various posts and is an NIH distinguished investigator.

After earning his doctorate from McGill University, he had various research posts at Yale University Medical School and New York University Bellevue Medical Center. He also is a visiting professor at University College London Institute of Child Health.

He has received the National Medal of Science and awards from the Cognitive Neuroscience Society, Society of Experimental Psychologists and Association for Psychological Science.