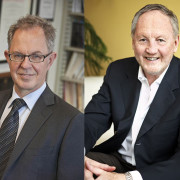 That’s the formula for developing great teachers, say two scholars who will share the 2015 University of Louisville Grawemeyer Award in Education for the ideas expressed in their book, “Professional Capital: Transforming Teaching in Every School.”

Teachers will automatically elevate their own competency when placed in a team environment that encourages individual contributions, group interaction and continuous learning, said Andy Hargreaves and Michael Fullan.

Using that approach to boost teacher skills works much better than using performance-based education models to reward or punish individual teachers, they found.

“Hargreaves and Fullan explain how teachers can thrive when they are treated with dignity and given freedom to exercise professional judgment together,” said award director Melissa Evans-Andris. “They also show how undue emphasis on teacher accountability has subverted the profession by pitting teachers and schools against each other and stealing the joy of teaching.”

“Professional Capital,” published by Teachers College Press in 2012, won awards earlier this year from the American Association of Colleges for Teacher Education and International Leadership Association.

This year’s awards are $100,000 each. Hargreaves and Fullan will split their prize.

Andy Hargreaves has held the Brennan chair at Boston College since 2002.

Previously, he taught at University of Toronto’s Ontario Institute for Studies in Education, where he co-founded the International Centre for Educational Change. He has been a visiting professor or fellow in the United States, Canada, England, Sweden, Hong Kong, Singapore and Japan.

In 2010, he earned top accolades in three different countries. He was named a Fellow of the Royal Society of Arts in Britain, earned the highest award given by the U.S. professional association Learning Forward and received an honorary doctorate from Uppsala University in Sweden, an honor also bestowed on Nelson Mandela, Noam Chomsky and Jane Goodall.

He is founding editor-in-chief of the Journal of Educational Change and has written, co-written or edited more than 30 books, earning awards from the American Educational Association, American Libraries Association, International Leadership Association and American Association of Colleges for Teacher Education.

Michael Fullan is professor emeritus at the University of Toronto’s Ontario Institute for Studies in Education. He taught there for more than 40 years and was education dean from 1988 to 2003.

Fullan writes the blog Motion Leadership and advises policymakers worldwide on the importance of educating all children. From 2004 to 2013, he was special policy adviser in education to Ontario Premier Dalton McGuinty.

He has received honorary degrees from Nipissing University, University of Edinburgh, Duquesne University, U.S. Hong Kong Institute of Education and Newman College. In 2012, he was named an officer of the Order of Canada for achievements in the field of educational reform.

He has written or co-written 40 books on topics ranging from the role school principals play in student learning to the challenges posed by school reform in big cities. He received the Bellwether Book Award and has been honored by Learning Forward and the American Association of Colleges for Teacher Education.

He has undergraduate, master’s and doctoral degrees from University of Toronto, the latter two in sociology.