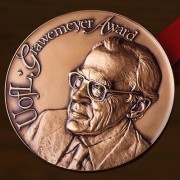 UofL presents four Grawemeyer Awards each year in music composition, world order, psychology and education. The university and seminary jointly give a fifth award in religion. This year’s awards are $100,000 each. Here’s the schedule for the free, public talks:

No reservations or tickets are needed for the talks.