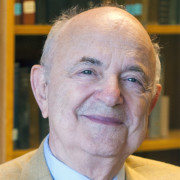 Working with researcher James Shields, Gottesman developed a model accounting for the genetic and environmental factors that can affect the risk of developing schizophrenia over time – defying prevailing scientific beliefs that only heredity or environment can account for the condition.

The two worked in London in the 1960s on a twin study of schizophrenia at the Medical Research Council Psychiatric Genetics Unit at Maudsley Hospital. Shields died in 1978.

Their model gave rise to the concept of “endophenotypes,” or measurable traits in people without discernible mental health disorders who could be at risk of developing them. Experts have said the concept could lead to a better classification system for psychiatric disorders than the one used for more than a century.

Over time, researchers have expanded Gottesman’s work to explain degrees of other psychiatric conditions, including autism, alcohol dependence and bipolar disorders.

“Gottesman’s idea has transformed our assumptions about the origins of psychological disease and wellness and, in turn, has helped to shape our contemporary understanding of the complexities of human nature,” his nominator wrote.

UofL presents four Grawemeyer Awards each year for outstanding works in music composition, world order, psychology and education. The university and Louisville Presbyterian Theological Seminary jointly give a fifth award in religion. This year’s awards are $100,000 each.

Irving Gottesman has been widely acclaimed by psychologists, geneticists and psychiatrists alike for his contributions to the mental health field.

A Cleveland, Ohio, native, he earned a doctorate in psychology at University of Minnesota-Minneapolis and a bachelor’s degree in psychology from Illinois Institute of Technology in Chicago. A U.S. Navy Korean War veteran, he also served as clinical psychology resident at the U.S. Veterans Hospital in Minneapolis.

He is past president of the Society for Research in Psychopathology and the Behavior Genetics Association and belongs to the Society of Biological Psychiatry and American Society for Human Genetics.

He was just elected an honorary fellow of King’s College London. Among his many other honors are the American Psychological Association’s Distinguished Scientific Contributions Award, American Psychological Foundation’s Gold Medal for Life Achievement in the Science of Psychology, International Society for Psychiatric Genetics’ Lifetime Achievement Award and the National Alliance for Research in Schizophrenia and Depression’s Lieber Prize for Outstanding Achievement in Schizophrenia Research.

He has been a scientific consultant to many organizations and has served on many journal editorial boards.