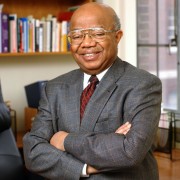 Education works best when parents, teachers, other school employees and the community pull together to make it happen, says the winner of the 2007 University of Louisville Grawemeyer Award for Education.

Federal law mandates instruction for all children but overlooks the need to help them become successful adults, James Comer, a Yale University child psychiatry professor, argues in his winning 2004 book, Leave No Child Behind: Preparing Today’s Youth for Tomorrow’s World.

Collaboration among the people in a child’s life can improve education in ways that testing and accountability can’t, he says.

In a program Comer developed, teachers, parents, administrators and others at more than 600 low-performing U.S. schools are making decisions by consensus to improve the educational experience for students. The level of student achievement has gone up at many of the participating schools.

Comer, winner of the 17th Grawemeyer education prize, was selected from among 32 nominations.

James Comer, Maurice Falk professor of child psychiatry at Yale University School of Medicine, has dedicated his career to child development and education.

He is perhaps best known for suggesting that the best way to improve the social, emotional and well-being of students is to give everyone with a stake in a school a say in how it is operated.

In 1968, he developed a program encouraging schools to form a diverse school governance team made up of teachers, parents, principals, students, janitors, cafeteria workers and psychologists. Many of the more than 600 schools across the nation adopting his approach have reported a higher level of student achievement.

A member of the National Commission on Teaching, he formerly served on the National Board for Professional Teaching Standards and the Carnegie Forum on Education and the Economy.

He has been a consultant for the Children’s Television Workshop programs “Sesame Street” and “The Electric Company” as well as for the Public Committee on Mental Health chaired by former first lady Rosalyn Carter.

Comer has received many awards for his work, including the Smithsonian Institution’s John P. McGovern Behavioral Science Award, the Heinz Award in the Human Condition, the Charles A. Dana Award for Pioneering Achievement in Education and the Harold W. McGraw Jr. Prize in Education from McGraw-Hill Inc. He also received a special presidential commendation from the American Psychiatric Association.

He joined the faculty at Yale in 1968 after completing a one-year residency at Hillcrest Children’s Center in Washington, D.C. Before that, he trained in the psychiatry department at Yale for three years. He holds a doctorate in medicine from Howard University, a master’s degree in public health from the University of Michigan and a bachelor’s degree from Indiana University.

His scholarly writing focuses on children’s health, children’s development and race relations. Among his hundreds of magazine articles are more than 150 columns for Parents magazine he wrote from 1978 to 1994.

He also has written or edited nine books, including Beyond Black and White, School Power: Implications of an Intervention Project, Maggie’s American Dream: The Life and Times of a Black Family and Waiting for a Miracle: Why Schools Can’t Solve Our Problems and How We Can.