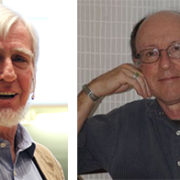 How do people know where they are and how they got there? Two scientists who have helped identify the brain’s mapping system earned the 2006 University of Louisville Grawemeyer Award for Psychology.

John O’Keefe and Lynn Nadel, who explained their theory in a 1978 book, “The Hippocampus as a Cognitive Map” and in later journal articles, are both university researchers. O’Keefe is professor of cognitive neuroscience in the anatomy and developmental biology department at University College London. Nadel directs the cognition and neural systems program at the University of Arizona.

They found that the brain forms a cognitive mapping system in the hippocampus section of its temporal lobe that acts as an internal global positioning system. Powering the system are “place cells,” neurons that use data about distance and directions to pinpoint locations.

Winners of the sixth Grawemeyer psychology prize, the pair were selected from among 37 nominations from seven countries. The 2005 psychology award went to Elizabeth Loftus, whose research on false recollections, the reliability of eyewitness reports and memories “recovered” through therapy has affected the way law enforcement and court officials view such testimony.

John O’Keefe, professor of cognitive neuroscience at University College London, works in the anatomy and developmental biology department.  He received a doctoral degree in physiological psychology from McGill University in Montreal.

He began at University College in 1967 as a National Institute of Mental Health postdoctoral fellow and has been there ever since, becoming a professor in 1987.

A fellow of the Royal Society and the Academy of Medical Sciences, he won the Feldberg Foundation Prize in 2001 for work in medical and biological science.

O’Keefe is a past chair of the British Neuroscience Association and has served on the councils of the Royal Society and International Brain Research Organization.

He has contributed to many academic journals, including Hippocampus, Cognitive Brain Research, Spatial Cognition and Computation as well as Oxford University Press’ cognitive science series.

After earning his physiological psychology doctorate, also from McGill University, he held National Institute of Mental Health fellowships at the Czechoslovak Academy of Science in Prague and at University College London.

A research associate at University College London in the 1970s, he later accepted posts at University of California’s Irvine and San Diego campuses and Dalhousie University in Nova Scotia. For 10 years, he co-directed the Complex Systems Summer School at Santa Fe Institute. He has been at the University of Arizona since 1985.

A fellow of the American Association for the Advancement of Science and the American Psychological Society, he belongs to many national and international neuroscience associations and several editorial boards for scientific journals. He received the 2005 National Down Syndrome Society Award for Research.

Besides co-writing “The Hippocampus as a Cognitive Map” with John O’Keefe, he has edited or co-authored books about Down syndrome, emotion, and language and space, and edited The Encyclopedia of Cognitive Science, published in 2003.