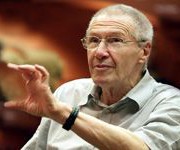 A concerto by Hungarian composer György Kurtág described as ranging through “many changes of mood, tempo and texture” has earned the 2006 University of Louisville Grawemeyer Award for Music Composition.

The work, “Concertante Op. 42” for violin, viola and orchestra, was commissioned by the Leonie Sonning Foundation of Copenhagen. Since its premiere in September 2003 by the Danish Radio Orchestra led by conductor Michael Schønwandt, it has been performed in Europe, Japan and the United States.

The 26-minute piece, one large movement divided into several sections plus a two-part coda, uses an unusually large orchestra for a concerto and includes solos written for and performed by violinist Hiromi Kikuchi and violist Ken Hakii.

“The orchestra is used to full advantage but without overshadowing the role of the soloists,” said award chair Marc Satterwhite. “After ranging through many changes of mood, tempo and texture, from intimate to violent, the final section is mysterious and ambiguous.”

Kurtág’s piece, winner of the 20th Grawemeyer music prize, was selected from a field of 145 entries from around the world. The 2005 music award went to George Tsontakis for “Violin Concerto No. 2.”

About György Kurtág
Born in 1926 to Hungarian parents, Györgi Kurtág has had a long and distinguished career in music.

He began piano lessons with Magda Kardos in 1940, also studying composition with Max Eisikovits in Timisoara, Romania. In 1946, he moved to Budapest to enroll in the Liszt Academy of Music, where he studied composition under Sandor Veress and Ferenc Farkas, piano under Pal Kadosa and chamber music under Leo Weiner.Kurtag1-thumb.jpg

In the late 1950s, he went to Paris to study with Marianne Stein and attended the courses of Messiaen and Milhaud, a move that he later said made him rethink his ideas on composition. His first work after returning to Budapest was a string quartet he called “Opus 1.”

His first internationally renowned work, “Messages of the Late Miss R.V. Troussova, Op. 17” for soprano and chamber ensemble, was premiered in Paris in 1981. As his international career evolved, he received commissions and was elected to various music academies in Germany, France and the United States.

In the early 1990s, Kurtág began to work outside Hungary more frequently. He served as a composer-in-residence with the Berlin Philharmonic and the Vienna Konzerthaus and worked with other organizations in the Netherlands and France.

He has received many honors in music, including the Ernst Von Siemens Prize and the Kossuth Prize from the Hungarian government for his life’s work.