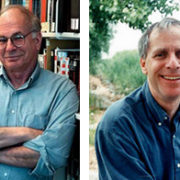 Working as a team for nearly three decades, the psychologists revolutionized the scientific approach to decision making, ultimately affecting all social sciences and many related disciplines.

Kahneman and Tversky demonstrated in experiments that normative mathematical models of probability and choice don’t account for most intuitive human judgments and decisions. Instead, a series of psychological principles, often leading to simplification of a problem, guide human behavior in the face of uncertainty. By identifying biases that guide human judgment, Kahneman and Tversky have clarified challenges for education in fields such as economics and medical decision-making.

Daniel Kahneman is the Eugene Higgins Professor of Psychology and a professor of public affairs in the Woodrow Wilson School of Public and International affairs at Princeton University since 1993. Since he arrived at Princeton, he has taught introduction to psychology courses. He is also professor emeritus at the University of California, Berkeley.

Amos Tversky earned his Ph.D. in psychology from the University of Michigan in 1964. At the time of his death in 1996, he was the Davis Brack Professor of Behavioral Sciences in the Department of Psychology at Stanford University.
Previously he held professorships at the Hebrew University of Jerusalem and Harvard University. A fellow at the Center for Advanced Study in 1970, he was elected to the American Academy of Arts and Sciences in 1980 and the National Academy of Science in 1985.

Dr. Kahneman and Tversky also advocated application of psychological principles to public policy. Their work has contributed to the determination of the value of public goods in litigation.