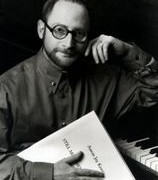 Kernis won the $200,000 prize for “Colored Field,” a concerto written for cello and orchestra and premiered by the Minnesota Orchestra in 2000. An earlier version for English horn was premiered by the San Francisco Symphony in 1996.

The Grawemeyer Foundation received more than 200 nominations from around the world for the Year 2002 music composition award.

About Aaron Jay Kernis
Aaron Jay Kernis’s evolution from self-taught child pianist to one of America’s most honored composers has been quick and dramatic.

A native of Philadelphia, the 41-year-old Kernis already has received two of music’s major honors, the Pulitzer Prize in 1998 and now the University of Louisville Grawemeyer Award for Music Composition.

Kernis began his musical studies on the violin. He then began teaching himself piano at 12 and composition at 13. His formal music education includes studies at the San Francisco Conservatory of Music and the Manhattan and Yale schools of music. He has worked with a variety of composers, including Grawemeyer winners John Adams and Harrison Birtwistle.

He first came to national attention in 1983 when the New York Philharmonic premiered his first orchestral work, “dream of the morning sky,” at the 1983 Horizons Festival.

He won the 1998 Pulitzer Prize for his “String Quartet No. 2 (musica instrumentalis).”

Other notable works include “New Era Dance,” commissioned for the 150th anniversary of the New York Philharmonic and recorded by the Baltimore Symphony, and the Grammy-nominated “Air” for violinist Joshua Bell. In addition, he has written “Still Movement with Hymn,” a piano quartet commissioned by American Public Radio; “Goblin Market” for the Birmingham (England) New Music Group; and “Double Concerto” for violin, guitar and orchestra, commissioned by the Saint Paul Chamber Orchestra, Aspen Music Festival and Los Angeles Chamber Orchestra.

Kernis has been commissioned by the Philadelphia Orchestra to write a piece for the opening of Philadelphia’s new performing arts center. The piece will be premiered in December.

He currently serves as the Minnesota Orchestra’s new music advisor. He also has served as composer-in-residence with the St. Paul Chamber Orchestra, Minnesota Public Radio and the Minnesota Composers Forum.

In addition to the Grawemeyer and Pulitzer prizes, he has received a Stoeger Prize form the Chamber Music Society of Lincoln Center, a Bearns Prize, an NEA grant, a Guggenheim fellowship, a Tippett Award, a New York Foundation for the Arts Award, a Rome Prize and awards from BMI and ASCAP.

Kernis’s music is published by Associated Music Publishers and recorded on the Argo label.